"Tetsuya Komuro is one of the most successful pop music producers of the ’90s, and is often credited for shaping post-2000 J-pop. He’s even collaborated with western artists like Jean-Michel Jarre. It also happens that he decided to produce a video game, developed by an obscure studio called System Sacom that disappeared two years later. It was published by a Sony-owned record label called Antinos Records,which had only published pop idols singles on the system so far. Even though the game is definitely a low-cost production, it’s kind of fun to roam around in. Its universes are all diverse, colorful, sweet and rather crazy. You are going through a world where shoes can come to life, fly in the air and score three-pointers after all. The result, with its downgraded yet charmingly weird appearance, looks like a mix between WarioWare and LSD Dream Emulator."  / hardcoregaming101.net 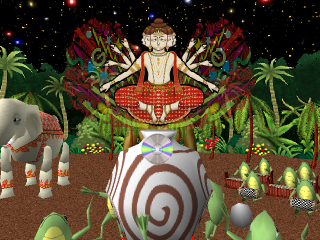 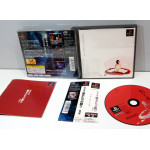